A seventy-five-minute ferry ride took us from PEI to Nova Scotia. In an hour we were settled in Truro. 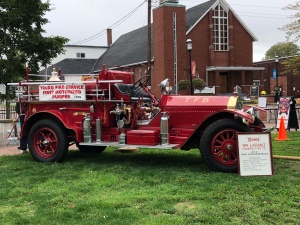 The next morning we attended a Farmer’s Market, one of our favourite activities. This one did not disappoint as we had nice chats with several vendors and made purchases from quite a few. There was also a challenge between nearby fire stations on a blocked off street in front of the market and it was interesting to watch the competition.

We drove along the south coast of Minas Basin and stopped at an info area on the Shubenacadie River, the longest river in Nova Scotia. This was a tidal bore area and we were told the river can rise ten feet in thirty minutes!

We went into Canada’s oldest general store, Frieze & Roy in Maitlands and then to Burntcoat Head Park, where the highest tides in the world have been recorded.

We drove the Annapolis Valley as far as Middleton before stopping for the night. After visiting a local church in the morning, we drove south to Bridgewater to spend some time with friends. They took us to a Gospel concert that afternoon and the next day we were treated to a tour that covered many areas we wouldn’t have found on our own.