The scenery started to change as we approached the eastern border of Manitoba.  The prairie landscape turned into one with tall trees and lush greenery.

I was filled with excitement to be entering Ontario. We hadn’t driven the far before so it was a new milestone for me.

It was early evening when we drove into Kenora, Ontario. Lake of the Woods welcomed us with its sparkling beauty. Other than the water, the first thing I noticed was how rocky the landscape had become. I marvelled at the difference a few kilometres made. Unfortunately my phone was still being charged so I have no pictures.

Darkness approached so we found a place to park for the night.

Our destination the next day was Thunder Bay. We drove through many little towns but since we had a long day of traveling planned we only stopped in a few to stretch our legs. The colourful rock visible in many areas added interest to our drive.

The time changed during our drive and we arrived in Thunder Bay under overcast and darkening skies. We camped in a truck stop, ate in their restaurant and retired early.

Woke up to low fog and cool temperature. Another long day of driving lay ahead, so we didn’t linger.

I joked with my husband about the superior view we had for a good part of the day. Lake Superior is rugged, beautiful and huge!

Not far outside of Thunder Bay I saw a sign for the Yellow Brick Road. I pointed it out but thought we didn’t have time to follow it and see where it led. My phone was charging so I didn’t even get a picture of the sign and I regret that enough to have written a future blog post on this missed opportunity.

Stopped in Wawa for lunch in the van. Took a picture of the giant goose and the view of Lake Superior from the tourist rest stop. The next stop was Pancake Bay where we explored a set of stores with souvenirs, crafts and intricate wood carvings.

For much of our 500 km journey there were views of the magnificent Lake Superior.  It was definitely a scenic drive.

We reached our destination of Sault Ste Marie and splurged on a campsite. A sauna was an unexpected treat here and the shower was most welcome. 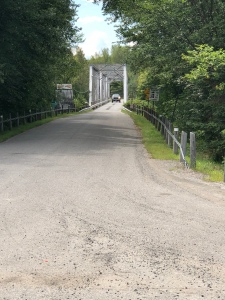 In the morning we lingered and enjoyed our surroundings before getting on the road again.

Our first stop was in the  nearby town of Bruce Mines, where we gave into temptation and indulged in fries from one of the many chip trucks we’d seen over the past day or so. While waiting for our order, we visited with a local lady who told us about the trap rock in the area. She also talked about freighters seen in the bay from her home just down the street. We hadn’t realized we were still that close to the water.

Our lunch stop was at Iron Bridge, in the parking lot of a tiny museum and tourist centre. It sure comes in handy to have everything we need with us and not to rely on fixing restaurants.

We saw the huge smoke stacks of Sudbury before we saw the city. It wasn’t the picturesque welcome we’ve received from other destinations.

There were some noisy vehicles around us in our parking lot campground that night.  In the morning we drove to see the giant nickel and take some photos. The roads we encountered were very rough which made it an easy decision to leave Sudbury behind us.

Tandy is an Author and Inspirational Speaker. Originally from Vancouver, BC she now makes her home in Calgary, AB. Tandy has published three books. Her second book, Dragonflies, Snowdrifts & Spice Cake, was a finalist for Canadian Inspirational Book in 2016. She has been a contributor to anthologies as well as being published in national and international magazines. Tandy enjoys spending time with family and friends and is active in her community as a volunteer with a personal development seminar. She is also a member of two local and two national writer organizations. Find out more on her website www.timewithtandy.com View all posts by timewithtandy